Advertise About Contact
Login or Register
Login Register
post-title Maplewood Author Pens ‘What Is Hip-Hop?’ for Kids (and Parents Too)
Share This

Maplewood Author Pens ‘What Is Hip-Hop?’ for Kids (and Parents Too)

Run-D.M.C. from What Is Hip Hop? (Art by Anny Yi, courtesy of Akashic Books)
by Donny Levit

Bedtime stories with your kids are about to include special guests appearances by Run-D.M.C., Salt-N-Pepa, Grandmaster Flash, Missy Elliott, the Beastie Boys and a slew of other music luminaries.

“What Is Hip Hop?,” a joyous and sublimely illustrated hip-hop history lesson, is the second children’s book collaboration between author Eric Morse and illustrator Anny Yi.

Morse, who calls Maplewood his home, is a musician, former rock critic, and self-described music nerd.

“If I were to map my music development, it starts with hip-hop. I was the kid with the how-to-breakdance poster — the one that shows you all the steps,” said Morse, who grew up in suburban St. Louis. “When I listened to hip-hop, I got this feeling that what I was listening to was something that had never been done before.”

The project reunites Morse with illustrator Anny Yi, who collaborated with him on “What Is Punk?”, their first children’s book that makes similar use of music genealogy. Yi, a Los Angeles-based visual artist, uses claymation techniques to create figures out of Play-Doh. Her site, Hey! Ho! Let’s Doh! caught Morse’s eye when he was first developing “What Is Punk?”

“Anny is very thorough and meticulous,” said Morse. “I wanted ‘What Is Hip Hop?’ to be a lot more conceptual than our first book.” He recalled a moment during the book development when he saw Anny’s early illustrations of the iconic Adidas sneakers on Run, D.M.C. and Jam Master Jay. “I love those Adidas shoes and wanted them to be larger than life,” he said.

Morse initially pitched the idea of releasing three different volumes of “What Is Hip-Hop?”

“Our book on punk covered a decade. For this one, I proposed doing an old-school volume that spanned 1979-1989, a second volume that covered the 90s timeframe — N.W.A., A Tribe Called Quest, Biggie Smalls and Tupac Shakur, and then do a final, more modern section,” explained Morse. After discussions with Akashic Books, well-known for publishing “Go the F*ck to Sleep,” the team decided to create the work as a single book. “We had to make a lot of really hard decisions,” said Morse. 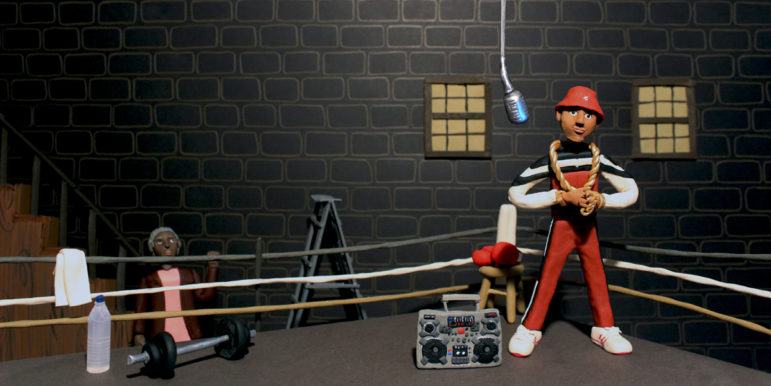 LL Cool J from What Is Hip Hop? (Art by Anny Yi, courtesy of Akashic Books)

In addition to Yi and Morse, the creative team for the project included Nelson George, an author and filmmaker known for his historical writing on African-American music, including “Where Did Our Love Go: The Rise and Fall of the Motown Sound” and “The Death of Rhythm & Blues and Hip Hop America.” Morse worked with George on the verse of the text as well as the hip-hop artists to include in the book. “That was really hard,” recalled Morse. “I’m sad that Nas and Slick Rick didn’t make it in.”

Morse believes that debating is part of being a music fan. “These books are for parents who love the music and culture as much as I do,” he said. “And it’s ok that they’re going to quibble about it.”

When speaking about his new book, Morse boasts the energy of an enthusiastic music fan who adores his subject matter. “I remember being in New York City the day that Jam Master Jay (of Run-D.M.C.) died,” recalled Morse. “I went out to Hollis, Queens for the vigil. I remember thinking to myself, I might as well be in Mecca.”