More and more, New Jersey is gaining recognition for its micro breweries. Add the good folks at SOMA Brewing Company to the list of those making great gains for the Garden State.

“How do we not have a taproom and brewery in South Orange and Maplewood? We have such a depth of character around here. We need our own beer,” said Adam Heydt of Maplewood. Heydt, his wife Farnaz, and Chris and Bianca Froelich of South Orange are the owners of the new SOMA Brewing Company. SOMA Brewing was born of a conversation between the two families, who thought they could make something special for the South Orange-Maplewood community and environs.

Since then, they’ve been very busy.

They focused on creating delicious craft beers that reflect the feeling you get from the South Orange and Maplewood area.

Chris Froelich was in charge of creating the recipe. “He is an avid home brewer,” said Adam. “We used trial and error until we found the right recipe.” Then they consulted a master brewer to help them scale the beer production, and found a warehouse on Springfield Avenue where they could keep their inventory.

Next, their beer needed a name.

“We brought our first two kegs into the [St. James’] Gate Publick House in downtown Maplewood. They are very supportive,” said Adam.

That was over Labor Day weekend. Two Towns Amber Ale was well received. Now you can find it in South Orange-Maplewood establishments like Coda, The Cassidy, O’Reilly’s and 1 South, as well as places further afield, like Par 440 in Short Hills and Capital Craft in East Hanover.

But you don’t have to go to a bar to find Two Towns. They are also working with community fundraising events.

“We hosted Oktoberfest at the Woodland on October 6 to help raise money for The Vanessa Pollock Music Fund of the Achieve Foundation,” said Farnaz. The event raised $7,500.

SOMA Brewing Company was also at Maplewood’s 2nd Annual Halloween Party at the Woodland and SOMA Sports & Social’s Bats & Brew both in October, and will be at Ultimate Frisbee’s 50th Anniversary Celebration at the Woodland on November 23.

While you’re there, ask them about their brand new IPA, Reservation. It’s a traditional New England-style IPA, with elements of hops and fruit. Launched the last week in October, it’s already in high demand.

Reservation is the second of what SOMA Brewing hopes to be 5 or 6 signature beers alway available. “We will reach out to the community to help us name our next beers,” said Farnaz. Residents should watch SOMA Brewing Company’s social media pages if they want to contribute.

And if creating a six pack of signature beers wasn’t enough, SOMA Brewing Company is working with Maplewood’s Mayor Vic DeLuca on SOMA’s first tap room, where folks can drink beer crafted by SOMA Brewing and enjoy themselves. They plan to have a venue open in late 2019 or early 2020.

“We envision this as a family destination,” said Farnaz. “A place where adults and kids can come and make memories.” 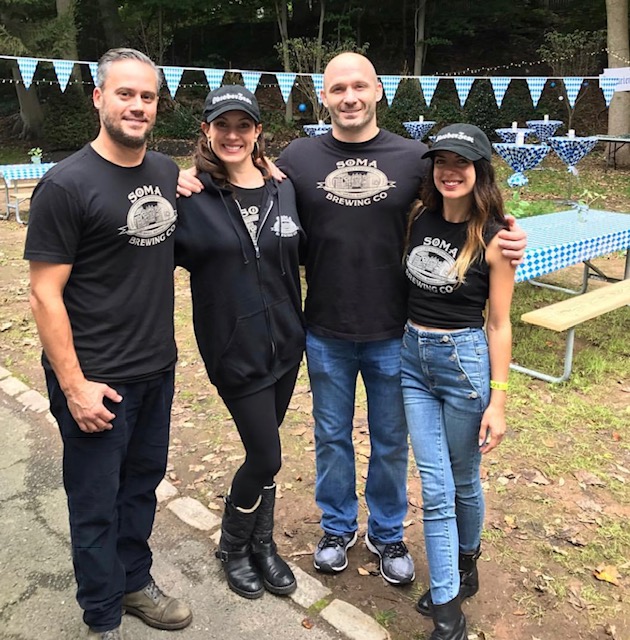 The taproom would not serve food, but hopes to partner with local businesses and perhaps food trucks to make sure they have happy customers.

“This is not a side hustle,” said Adam. “This is our passion.” With delicious beers like Two Towns and Reservation, SOMA Brewing Company and micro breweries are likely to be New Jersey’s passion soon, too.