Pulitzer Prize-winning journalist and Maplewood Literary Award winner Dan Barry will be reading from and signing copies of this new book This Land: America, Lost and Found,  at 7:30 p..m. on September 13 at Words Bookstore in Maplewood, NJ.

In the wake of Hurricane Katrina and on the eve of a national recession, New York Times writer Dan Barry launched a column about America – not the one populated only by cable-news pundits, but the America defined and redefined by those who clean the hotel rooms, tend the beet fields, endure disasters both natural and manmade. For more than a decade, Barry crisscrossed the country, filing deeply moving stories from the tiniest dot on the American map to the city that calls itself the Capital of the World.

In THIS LAND: America, Lost and Found (Black Dog & Leventhal; September 11, 2018), Barry selects nearly 100 essays from a decade of his distinctive This Land columns that explore uniquely American moments from every corner of our country: essays about a community’s send-off for an 18-year-old beginning her Army career in exchange for college tuition in Mohave Valley, Arizona, and the larger meaning of a knocked-down telephone booth in Prairie Grove, Arkansas; about a gathering of retired burlesque queens in Baraboo, Wisconsin, and a bullet fired through the living-room window of a black mayor in Greenwood, Louisiana; about the economic struggles of a dairy farmer in Ferndale, California, and the execution by electric chair of a man in Nashville, Tennessee. The stand-alone dispatches fit together, jigsaw-like, to present a rarely seen and profoundly powerful portrait of American endurance that transcends politics and remains ever-present.

Bringing together the best of this ten-year odyssey with select images by award-winning Times photographers, including Ángel Franco, Nicole Bengiveno, and Todd Heisler, these narrative and visual snapshots of American life create a grand tapestry of our shared experience, capturing how our nation is at once flawed and exceptional, paralyzed and ascendant, as cruel and violent as it can be gentle and benevolent.

Barry previously authored the books The Boys in the Bunkhouse and Bottom of The 33rd. Besides that shared Pulitzer Prize, Barry also has a George Polk Award; an American Society of Newspaper Editors Award for deadline reporting (for coverage of the first anniversary of 9/11); a Mike Berger Award for in-depth human interest reporting; and the PEN/ESPN Literary Award for Sports Writing. 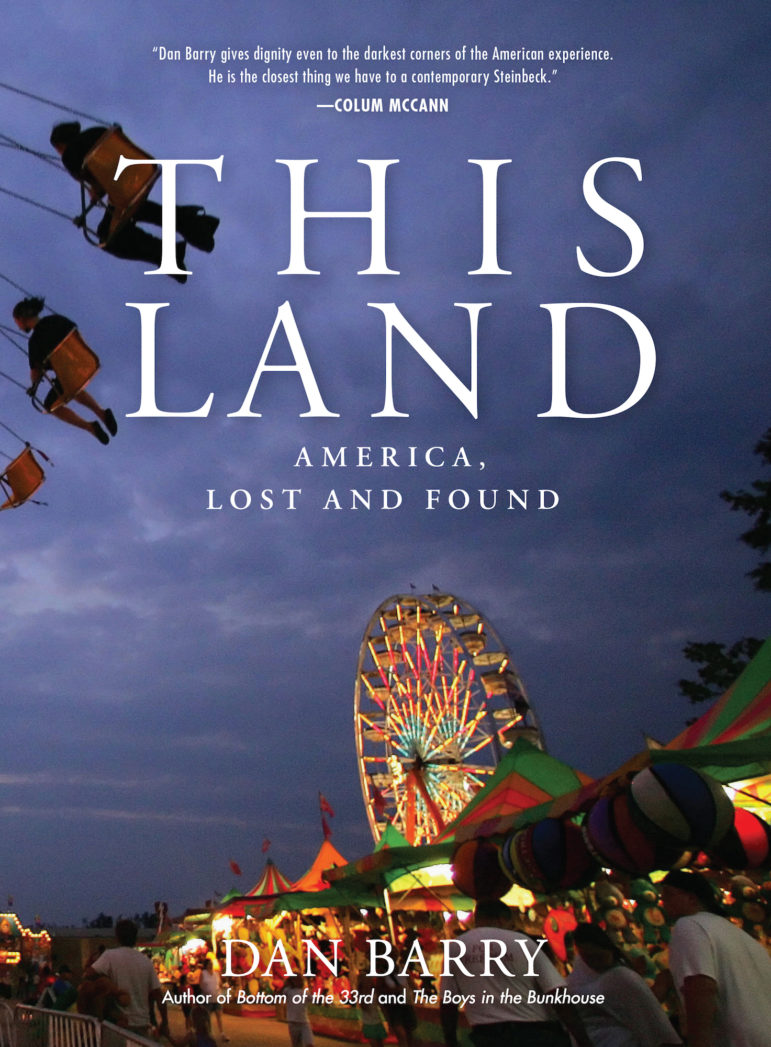 “Dan Barry gives dignity even to the darkest corners of the American experience. He is the closest thing we have to a contemporary Steinbeck.”  — Colum McCann

“Dan Barry is an American treasure, and This Land is a beautifully conceived, essential book on American lives and places. His understanding and love of the American experience — small towns, fractured lives, beauty, suffering, and the physical landscape — is unparalleled. I’m grateful to him, and for him, for chronicling our lives, honoring our history, and recognizing our connection to each other.” — Rosanne Cash

“This Land reminds us that the greatest strength of the American character is America’s characters: men and women who are resilient, gracious, eccentric, world-weary, bright-eyed, funny, complex, tragic, surly and yes, even, kind.  Dan Barry proves once again that in his intelligent company, attention paid is its own reward.  He assures us, too, that eloquence, wit, and compassion – all the virtues we need now – have not been purged from American discourse and are alive and well in these pages.” — Alice McDermott

“There is something incrementally, and in the end almost infinitely heartbreaking and transformational, about Dan Barry’s haunting anthology… With a Dickensian breadth of curiosity and compassion, Barry has been determined to shadow and record a decade in the quotidian flow of national life-events that are all the more indelible, mysterious, and uncanny for their specificity.” — Ric Burns